Construction Backlog Up, Contractor Confidence Down in March 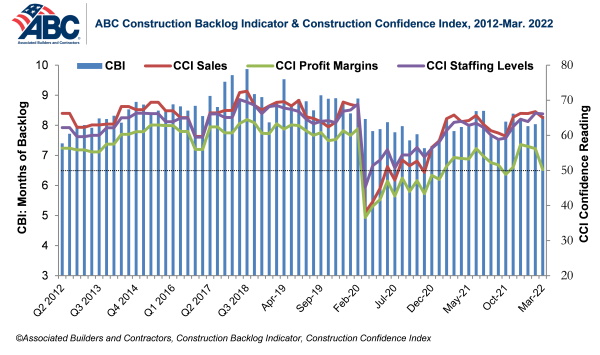 WASHINGTON, April 12—Associated Builders and Contractors reported today that its Construction Backlog Indicator increased to 8.3 months in March, according to an ABC member survey conducted Mar. 22 to April 5. The reading is up 0.5 months from March 2021.

ABC’s Construction Confidence Index readings for sales, profit margins and staffing levels declined in March. All three indices remain above the threshold of 50, however, indicating expectations of growth over the next six months.

“Demand for construction services remains strong despite sky-high materials prices, skills shortages and elevated bids,” said ABC Chief Economist Anirban Basu. “ABC contractors indicate that demand will remain strong, with 65% of contractors expecting sales to grow over the next six months. Backlog increased in March, indicating that bidding opportunities remain plentiful. The recent rise in interest rates could induce certain project owners to move forward with construction work to access affordable investment capital while it remains available. It is also conceivable that at some point private demand for construction services will decline as the cost of capital rises.

“If the story ended with demand, it would be as gratifying as a fairy tale ending with happiness across the kingdom,” said Basu. “Alas, one must address the issue of supply. More than three-quarters of contractors indicate that they had recently suffered some setback in delivering construction services.

“Among the primary factors are a lack of sufficiently skilled workers as well as materials and equipment shortages. These dynamics will continue to increase the cost of construction delivery during months to come. The Russia-Ukraine war has exacerbated inflationary pressures and will likely result in more aggressive monetary tightening by the Federal Reserve. For now, the average contractor expects to be able to pass along a significant fraction of the cost increases to project owners. It remains to be seen whether that will persist as interest rates rise.”

Construction Input Prices Up 3% in March, 24% Year Over Year

Wells adds Director of Marketing to its National...

AkzoNobel supports its partners as they navigate the...

ABC Supply Matching Donations To Homes For Our...